Life is weird sometimes. It seems that it’s impossible for everything to be down or everything to be up. Maybe we live with all the aspects of our lives on parallel rails that are constantly in flux; rising, lowering, coming together and pulling apart. Just because one part is winging along in an upswing and another is being dragged through the mud and detritus in the gutter doesn’t mean one or the other will stay that way for long. Maybe this is what keeps us going when we think we don’t want to keep going, or it’s hard to keep going – the fact that when things are a big bummer, despite appearances there is always something on its way up whether we know it or not.

I don’t always put this thought to practice in my own life and sometimes I dwell on the things that bother me more than I think about the things that are fun and good and that more touchy-feely people would refer to as blessings. But every now and then I am forced to remind myself that even when I fail at something or lose something or have a lot going wrong, there’s always something else going right. If I didn’t remind myself of this I’d stay permanently in the gutter, and I think most people would do the same. If nothing seems hopeful, why keep going? The fact that we all keep going must tell us that something, somewhere, is going right. Even when I fail at trying to think this way, I succeed at something else, so it all evens out in the end.

So it’s fall here in Anchorage, my favorite time of year. I spent Sunday with an old buddy from high school. We met up on the Kenai and took his drift boat down to the middle river to try our luck with the trout and silver salmon. It was a stellar day out on the river; bluebird skies, fall colors in full swing, river full of fish, boat full of PBR. The fishing was a tad slow, but that didn’t bother us much, except for feeling slightly lame for not coming home with some fish for the freezer. 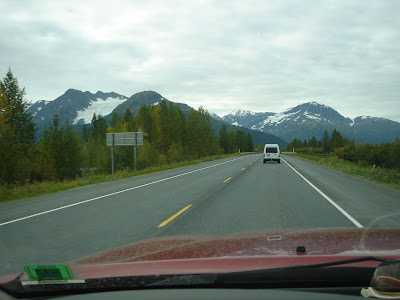 Don't let the fact that I take terrible pictures take away from the amazing scenery on the drive down to the Kenai.

We landed a few small trout, but didn’t take the time for pictures because we wanted to release the fish quickly – trout are catch-and-release only on the Kenai so you might as well treat them nicely so that there are trout for next year. We trolled for silvers for a few hours but got nary a nibble, which smarted after seeing boatloads of guided tourists unloading their limit-out catches earlier in the morning. We enjoyed each other’s low-key company and it was fun to hang with a friend I’ve known for over twenty years – as a military brat, I did a lot of moving around as a kid and I don’t have many permanent childhood fixtures in my life. It’s fun to pal around with the ones I do have. 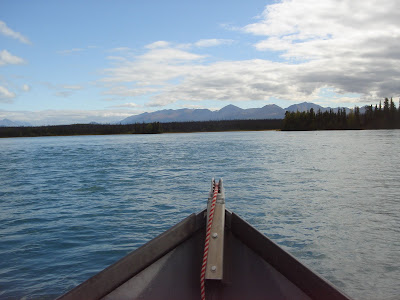 And the view from the boat wasn't half bad, either, and you can almost make it out even with my lousy picture taking.

Then later that night something bad happened in my life, like really pretty much a big downer of an event. But I still look back on Sunday as a good day because of spending the beautiful day with my old friend doing something fun. So surely that is a positive-thinking success, right?

I’ve been wracking my brain all night trying to think of a way to relate this to gear or sports or climbing or something. But I guess the point is that even though sometimes things don’t go the way you want, something else also exceeds your expectations. So you don’t catch any fish, but you get to spend the day out on the river in beautiful weather with an old-friend-turned-new-buddy. So you want to climb a route but conditions are bad, so you climb another route and have a great time. You head out to ski, but when you finally gain the ridge, you hear and feel a big “whomph” under your skis, signaling that it’s a day to slink back home along the skin track, no turns to be had – but you live to ski another day. So someone lets you down or hurts you, but someone else steps up to support you, or you find out that you can do it on your own after all. It’s the circle of life, surely. Or is it synchronicity, or karma?

Someone else can maybe step up and fill in the blanks for me; I’m not the most philosophical of people. I pretty much take things as pragmatically as possible and perhaps this post reflects that. You won’t find me face down on the floor in yoga class, striving for inner peace and $15-per-hour-induced wisdom, but you might find me giggling hysterically at the dry hump scene in Bad Teacher just hours after a painful breakup. Might, I said, MIGHT! We are talking hypothetically, here. Everyone has their ways of dealing and, you know, that’s how I’d deal.

Anyway, I suppose the point is that every day is a chance to have something good happen, even if a bunch of bad stuff happens too. And Cameron Diaz might just help you find it.

4 comments on “Riding the Rails”