The end of my walkabout was only a few weeks or maybe days ago, I can’t quite figure that out. But I’ve been trying to get things to feel “normal,” whatever that means anymore. A walkabout is supposed to change you and your life, so feeling “normal” probably isn’t exactly what you want at the end of it – but it’s nice to come back to things that are familiar, work the way they should, and are easy and understandable. To me, that makes things “normal” so although many things about me and my life have changed, I still like the things I like, so being in Alaska feels normal and great.

Today dawned overcast, rainy, and muggy, the 57 degree weather rounding out the lineup to make it a perfect day for a run up in the mountains. Since coming home to Anchorage, I’ve been having a fun time saying hello to my old haunts which haven’t really changed a bit. Geardog’s recovering from some injuries so we try to keep it short as he builds his fitness back up, but we usually fail because so many trails beckon us. Today was no exception, with a short out and back turning into a slightly longer loop, made even longer by an unplanned detour brought about by a puddle, of all things.

I’d forgotten about this puddle, affectionately catalogued in my brain as “Lake Powerline,” which forms after every significant rainstorm and hardly ever really goes away. It covers the trail completely, and there’s no easy way around. If you try to duck around through the brush, you have to wade through a marsh anyway, and the other side is dense brush which, after a rain, is usually so wet that you’d end up soaked regardless. So I used Lake Powerline as an excuse to duck down yet another trail and make my loop a tad longer.

I kind of feel that it’s usually best to stick to your original plan, because you made it for a reason. Extreme environments give us feedback in many forms, and subconsciously we probably pick up on this feedback as we make plans. I had already altered my track when I decided to complete the loop rather than the out-and-back, and was altering it still further by opting to take the side trail. I’m comfortable with the environment here and am pretty adept in keeping myself safe, but even so I was for whatever reason on high alert as I trotted down the trail.

Geardog is trained to go on ahead of me so I can both keep an eye on him and read his body language for clues to what’s coming up on the trail. A raised head, flared nostrils, a curled tail – all of his actions give me feedback. He also wears a bell so that I can keep track of him and so that other trail denizens can hear us coming. Today he didn’t seem on alert about anything; with a brief raise of his head that told me something was out here somewhere, but really, it’s Alaska – something is ALWAYS out there. Still, I was wary – alert but not scared, aware but not overcautious. We made noise as we ran along and I’d no reason to believe we’d run into trouble, yet for some reason I unlocked the bear spray canister from its holster and ran with the holder open.

Bear spray canisters are highly pressurized devices filled with oleoresin capsicum, the same stuff the cops will use to take you down if you’re bad. I heard a rumor that bear spray is less concentrated than the human-intended version, but I’m not sure that’s true. Regardless, bear spray hurts if it gets on you and can incapacitate a person through temporary blinding and pain. You don’t want to accidentally discharge your canister, so most holsters have a strap that fits over the trigger for safety purposes. There’s a plastic wedge that serves as the trigger’s safety, but I’ve heard of that being accidentally flipped off, causing the canister to discharge, so I like the extra strap just in case. When I run I take the holster off it’s harness and run with it fitted around my left hand, like some runners do with water bottles. I’ve practiced quick discharge with the canister, both in running configuration and in biking configuration (in which the canister is attached to my backpack waist strap). I’m pretty confident I can fire the canister without fumbling, so I don’t worry too much. Today, though, despite the lack of any specific threat or need for extra caution, I flipped open the strap and ran along with my thumb on the safety wedge. No reason for it, really.

A steady thump, thump, thump on the trail behind me alerted me to another runner, and I turned to greet him, only to come literally face-to-snout with a young bull moose running down the trail. Whatever breeze there was must have been at our faces, for Geardog heard the moose only when I did. “Hai! Moose!” I yelled (or think I yelled – I probably squeaked), causing the moose to break stride in confusion, seemingly not having seen me until I yelled. I took advantage of this extra second and grabbed Geardog and dived into the brush, drawing the bear spray and knowing that I’d not even have time to discharge it if the moose kept coming.

And it did, but only by stepping forward a few feet, the slow synapses in its brain sending smoke signals back and forth (moose aren’t bright), deciding whether to opt for fight or flight. “Is this moose really going to charge me?’ my much faster brain asked, as the moose crept forward, gazing at me. I popped the trigger wedge on the bear spray in disbelief, thinking “oh shit. It’s really going to charge me,” all the while knowing that if it did, it would cover the six feet between us faster than I could move a muscle. I realized I’d better convince this smallish juvenile that I was tougher than it. “Hey MOOSE!” I bellowed, rattling bushes. This got the moose to spin around and face away from me and look back down the trail from where it came, at which time I realized that it was probably running because it was being chased by a bear. Big wildlife doesn’t run without a reason. I wanted to disengage from this moose and I sure wanted to put some distance between me, it, and its pursuer. Struggling through the dense brush wasn’t an option and neither was heading up the trail from where the moose had come. My only option was to keep going, and it looked like the moose was going to take that option first, in which case I’d be between a bear and its prey.

I braced myself for the moose to run by me on the trail as I kept up the hollering, but instead it leapt into the underbrush on the same side of the trail I was standing on, and I took the opportunity to bolt off down the trail, not running but walking briskly with Geardog at heel, keeping tabs on the moose as it paralleled my track for a few dozen yards while watching for any other animals to make an appearance on the trail behind me. I hoped it wouldn’t decide to pop back out on the trail for another faceoff, and when its thrashings stopped for a moment, I squirted ahead, knowing that soon enough the bear that was after the moose would make an appearance. The spray canister was at the ready, though, and interestingly enough I wasn’t scared. I was adrenalized, for sure, and my legs shook a bit if I stopped, but my heart wasn’t pounding and I wasn’t actively scared. Just ready.

That was the last I saw of any animals for the day, but it was a tense walk back to the car. The vegetation has grown up so much that I didn’t dare run; if a running moose could sneak up behind me, I could certainly sneak up behind a bear if I ran. So I walked, talking loudly to Geardog and waiting about 1/2 mile before putting my pepper spray back in its holster. My detour meant that I had thirty more minutes of winding through head-high grass and brush to get back to a wider trail which made me chide myself just a wee bit for poor planning.

But we made it. Far from being put off or scared or alarmed, I feel even more at home than I did before. A moose encounter – NOW things feel normal. Geardog’s happy to be back and so am I. Thanks for the hospitality, lower 48! But it’s good to be home. 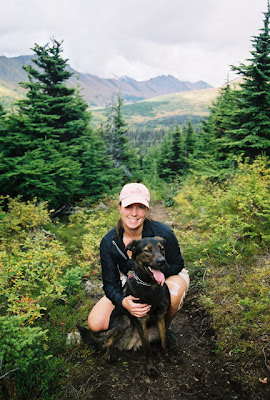